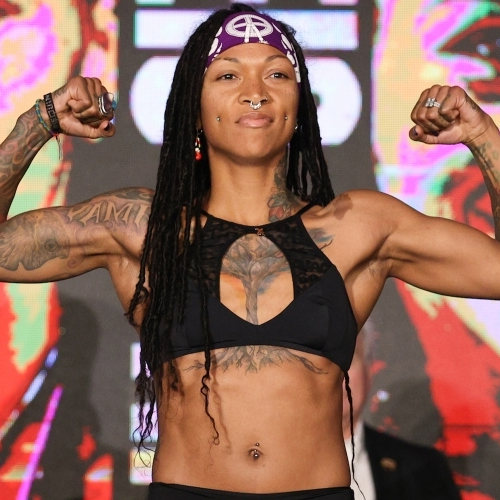 In the guest corner, she comes from the great fighting city of Philadelphia, by way of Providence, RI, with 19 wins, seven defeats with five big wins by knockout. An athlete and actress, she is scheduled to star opposite Jodie Foster in Season 4 of the HBO blockbuster series, True Detective. Please welcome the reigning WBA, IBO, and WBO Super Lightweight World Champion, Kali “K.O. Mequinonoag” Reis.

Reis’s road to success has been an interesting and, at times, arduous one. The youngest of five, with Native American and Cape Verdean family roots, she never felt like she fit in. Powwows and ceremonies were a part of her upbringing in East Providence, but because she didn’t live on a reservation, she says she was labeled the “token native kid.” She’s learned to embrace her heritage and incorporate it into her fights, introducing herself in her native Wampanoag language (her moniker Mequinonoag means “many feathers” or “many talents”). Her ring entrance is Matt’s favorite and for her, a powerful reminder of why she fights.

Raised by a Christian mom, Reis also had difficulty embracing same-sex attraction and being a part of the LGBTQ community. Yet, she married her best friend, Brian Cohen. Reis jokes, “Did I lose my gay card because I married a man?” Reis is also a stepmother and holds out hope of one day having a child of her own, something she can’t take for granted, having experienced menopause in her twenties.

Her ongoing reproductive health issues are an obstacle she’d had to overcome, both in her career and in her personal life. She remembers feeling like a failure, not being able to do the “one thing I was put on this earth to do,” have children. Keeping her genetic line alive means a lot to her, and to the many women she can empathize with who struggle with infertility. Being a professional athlete is tough enough, but even more so as a woman.

More than a decade after experiencing early menopause, her cycle returned, although she says it’s not completely normal. Reis values taking care of herself, and her ongoing health concerns are the cause of her postponed undisputed fight. She credits her tremendous support system with helping her to cope and remain hopeful for whatever is in her future. Acting, like boxing, demands focus.

One of the first women to fight on HBO (the fight in which she challenged Cecilia Brækhus) little did she know she would later be starring in a hit series on the same network. She already had three acting credits, the first being a starring role in the movie Catch the Fair One, based on a story she co-wrote with director Josef Kubota Wladyka. Reis is excited to film HBO’s True Detective in Iceland this year.

Her warrior spirit marches to the beat of a different drum—the drum of her people—and she uses her platform to advocate for Native rights. An active supporter of the Missing and Murdered Indigenous Women and Girls (MMWIG) movement, she’s been able to elevate Native voices and educate and inspire her community. Finding her own identity has a lot to do with knowing her roots and she wants to help others do the same.

Now comfortably aligning with many minority groups, you might say she’s been fighting as, and for, the underdogs her whole life. And she’s proud of being different. Ever the athlete, Indigenous-American, African, gay, straight, motorcycle mechanic—she knows who she is and where she comes from riding in a lane all her own. What was once a source of shame has become her greatest source of strength.

Stay tuned for Matt’s FAST FIVE to find out what she eats after making weight, her very cute clean joke and, as always, her favorite boxing movie.