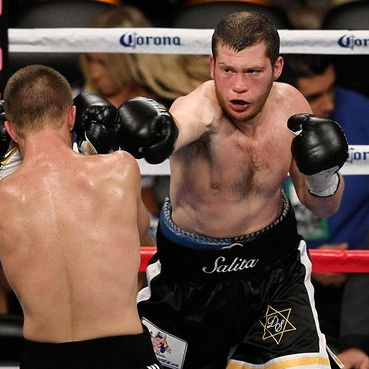 “I do believe that America is the best country in the world and I’m very grateful for this land of opportunity. I came here with nothing.”

In the guest corner, from Brooklyn, New York by way of Odessa, Ukraine SSR with the outstanding record of 35 victories, against only two defeats with 18 wins by knockout, the former IBF International, the WBA International and the WBF Jr. Welterweight World Champion, now promoter, “The Star of David” Dmitry Salita.

Why is Salita tougher than life? He knows a thing or two—or twenty—about succeeding in the face of great odds. When he was nine, is family came to the US from Soviet occupied Ukraine, to escape antisemitic persecution and to build a better life. One of his earliest memories of life in Brooklyn was the stunning variety of fresh fruits and vegetables at the market, something he’d never before seen.

He began his boxing career at age 13, channeling his frustrations with immigrating to become the best boxer he could be. He discovered Starrett City Boxing Club, which was then in the basement of a parking garage with no A/C, no heat, no bathroom. But it was free. And the atmosphere inspired him to come back—that and Jimmy O’Pharrow.

He loves America and that in this country eventually you can be called an American like everyone else. Although Salita is far from being like everyone else. For one, he’s an Orthodox Jew and as such follows strict Jewish law; he does not fight on the Sabbath or Jewish holidays, and he keeps kosher. He lives and trains within walking distance of the synagogue.

In 2013 he retired from boxing. Now as President of Salita Promotions based in Brooklyn, with 54 events under his belt, Salita represents some of the most exciting fighters in the world today. You could say the unanimous decision on Salita is that he’s among the most talented, dedicated, fair-minded men in the business. A business that he’d like to see change for the better.

Matt and Dmitry wrap up the podcast with a candid discussion of the boxing industry’s pitfalls and potential.

When asked about the raging war in the Ukraine, it’s no surprise given his life experience that Salita feels compassion for civilians on both sides of the conflict. Of his future he says, “Hopefully life becomes sweet…we have to do our best to make it sweet.” For Salita, sharing the love makes the toughness go down a little easier.

Check out Orthodox Stance, a documentary about Salita’s career and his life as an Orthodox Jew which received Best Documentary Film honors at the 2008 London Jewish Cultural Awards.

Stay tuned for Matt’s FAST FIVE to find out Dmitry’s favorite smokehouse in Brooklyn with a chef/boxer owner and his favorite box office boxing flicks.