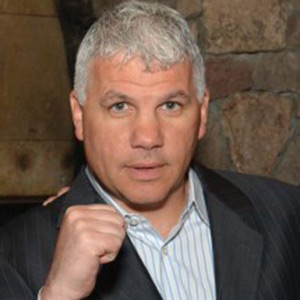 “If you’re gettin’ hit, you’re getting’ knocked down, you get up and you get back in there and you throw punches.”

In the guest corner, he comes to us from White Plains, NY by way of the Bronx, a world class professional boxing promoter with over 170 live cards, including The Paramount’s “Rockin’ Fights” series. He’s a former district attorney and 1988 New York Golden Gloves winner, New York Boxing Hall of Famer and CEO of Star Boxing, Joe DeGuardia.

In every aspect of his life boxing has helped develop DeGuardia’s character, his strength. One night while driving on the heavily trafficked Long Island Expressway, he was in a head on collision with a car driving the wrong way by an intoxicated driver. DeGuardia’s guardian angels must have been looking out for him. The other driver died, but he escaped without major injuries, nothing short of a miracle. Still, the doctors said his recovery would take months. DeGuardia, with a true fighter mentality pushed through the difficulty, and was moving around in just days.

But this wasn’t his first car accident.

When he was only 17, while training for the 1988 Olympics, he was a passenger in his cousin’s car when “a tree jumped in front of it.” DeGuardia, in the passenger seat, went through the windshield. Doctors told him he wouldn’t box again, but his desire to fight proved to be stronger. While graduating at the top of his class at Hofstra Law School, DeGuardia won the Golden Glove Championship. After graduating, rather than continuing to fight and break his father’s heart, he went to work as a prosecutor for the Bronx District Attorney’s Office. Afterward he founded his eponymous law firm.

DeGuardia agrees—boxing is a brutal business. He’s doing what he can to change it for the better, because while there are things about the business he doesn’t like, it’s the sport that he loves. He transformed his father’s Morris Park Boxing Club into one of the busiest boxing gyms in New York and founded Star Boxing to promote the sport in 1992. Much like the athletes, boxing is tougher than life. Over the years the appetite for boxing has waxed and waned, but when it gets knocked down, it gets back up again. It’s a sport that’s both an art and a science, which DeGuardia believes people appreciate.

Mum’s the word on what’s next for Star Boxing! Stay tuned to learn more and get their ever popular merch.

CHECK OUT all our inspiring podcasts at https://www.lifestough.com.