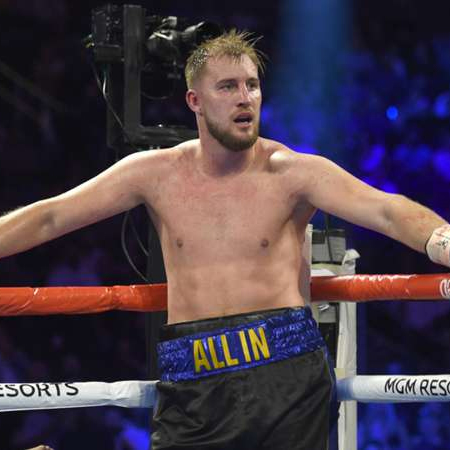 So far Wallin’s only defeat is to the reigning heavyweight champion, Tyson Fury, who won the fight on decision. Wallin’s performance had defied the odds despite the loss, coming in as an over ten to one underdog. Wallin says that going 12 rounds with the more experienced fighter felt more like a win than anything. He’d had 15 years of training under his belt before he took on Fury, and he’s more motivated than ever.

Wallin credits his father, a former amateur boxer and trainer, with inspiring him to seize the day, to give 100% effort every time and to keep moving forward. “Even if something were to happen to me; don’t stop,” his father told him. Those words would prove prophetic when just four months before the bout with Fury, Wallin’s father died unexpectedly of a sudden heart attack.

To cope with the loss, Wallin followed his father’s advice as much for himself as for his dad. His was in the gym the day after his father’s death, fighting through the tears. Wallin finds solace in the gym. He says boxing is a “safe place” for him. His profession played an important role in helping him to grieve the loss of his biggest supporter.

Since he turned pro in 2013 he’s been able to concentrate solely on boxing—no side hustle. In Manhattan since 2017 Wallin may always take Sunday’s off, but he goes hard core, five hours a day, five or six days a week. The Swede treats his training like it’s his job. His performance in the ring reflects his discipline and his ability to laser focus.

Matt: “Boxing’s not a sport you play…you compete. A tiny lack of concentration could be big trouble.”

Wallin: “One punch and it could be over…you learn to always stay focused.”

When asked about where he finds the motivation to train so hard, the heavyweight champ admits, “It’s not always fun I’ll tell you that. But I do it ‘cause I want to be the best.” Surely his father would be proud.