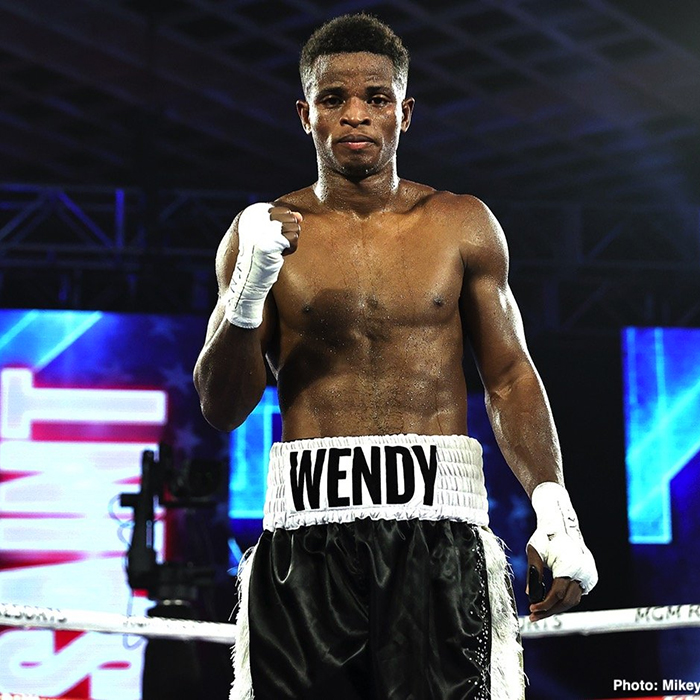 In the guest corner, coming to us from Huntington, Long Island, NY, by way of Port-au-Prince, Haiti, bringing an impressive record of 13 wins against only one defeat with six big wins by knockout. Matt welcomes staple performer of Star Boxing’s “Rockin’ Fights” series, Wendy “Haitian Fire” Toussaint. (Since recording, Toussaint logged another win against Asinia Byfield in Madison Square Garden.)

Coming from extreme poverty, Toussaint is no stranger to what he calls “walking hard” to survive. He’s been working since he was a kid and even now does whatever he can to provide for his family. You might be surprised to learn he earns extra income as a school bus driver. He’s also a volunteer fireman. And he’s not afraid of a challenge or of a little pain—essential qualities for a successful fighter.

When he was only seven, Toussaint moved from Haiti to French Guiana, where his female cousin took him to the boxing gym because she wanted to learn to fight. He remembers getting his ass beat, but for some reason, he kept going back. He spent much of his childhood playing soccer and boxing, along with working odd jobs to ensure he could eat. He became a good amateur fighter and moved to New York in search of an opportunity to advance his career. He found that opportunity in Huntington.

Outside the ring he may be one of the nicest guys you’ll ever meet, but in the ring, he’s a mean dude. Toussaint credits his early success to really wanting it. One of the greatest challenges he faced was fighting Charles Conwell. Conwell fought Long Island fighter Patrick Day, knocking Day out in the 10th round; Day was hospitalized, in a coma and died four days later from a brain injury. The community was shaken. Toussaint says he didn’t know that boxing could be a deadly sport.

After praying and mustering the courage to fight Conwell, his only loss, Toussaint says he’s a “different animal” now. He takes his job very seriously and plans to prove himself a champion.