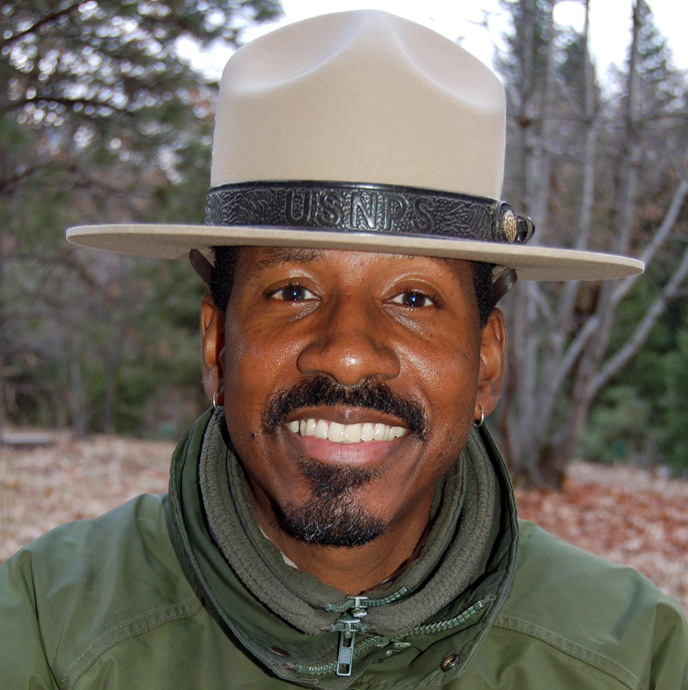 Many people have never been to a US National Park. If you’re African American, the chances are even less that you feel compelled to visit. But today’s guest on the Explorers podcast tells us that the closest we can come to visit Africa is to spend time in one of America’s National Parks.

Our podcast host, Richard Wiese, sat down and enjoyed a conversation with Shelton Johnson, a US National Park Ranger in Yosemite National Park. He is also a prominent speaker on our national parks. He also shares the history of the Buffalo Soldier with those who are interested.

Shelton was featured on Ken Burn’s documentary special on the National Parks. When he spoke with Richard, Shelton said he gets paid in “gasps” and that he lives for that moment when young people experience the parks for the first time and have those “Wow” moments.

He’s had the pleasure of camping with Oprah and showing President Obama and his family around the park. He enjoyed watching them as they experienced all the grandeur of the falls, sequoias, and all the rest that comes as part of the Yosemite experience.

African American cavalry and infantry troops served in the west after the civil war. The name “Buffalo Soldier” was bestowed upon them by the Plains Indians. The hair on their heads was not dissimilar to the hair on the buffalo head, thus the name. Although many Americans are not familiar with the Buffalo Soldiers, they were memorialized in the song “Buffalo Soldier” by reggae musician Bob Marley.

Ranger Shelton works to get more African Americans to visit our National Parks and realize and acknowledge that the parks are for all people, including them. He feels like all Americans should be encouraged to visit the Parks, here and abroad, and experience the wonder of them.
To learn more about explorer Shelton Johnson and his experience with the US National

Parks, check here. Learn more about the role of the Buffalo Soldier in our history. To hear about other explorers, join us for new episodes of Life’s Tough: Explorers are TOUGHER! At https://www.lifestough.com/podcast/explorers/.