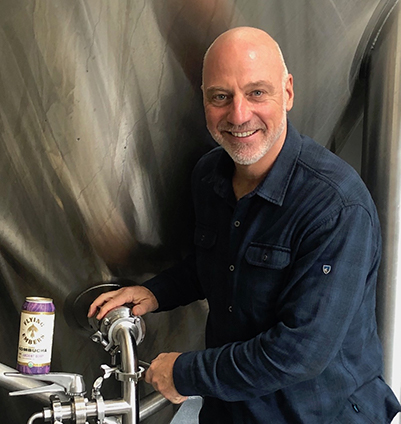 Bill Moses, co-founder of KeVita Probiotic Drinks whose goal is to “disrupt the alcohol beverage industry”

Dustin Plantholt’s “Life’s Tough—YOU can be TOUGHER!” podcast is honored to feature Bill Moses, co-founder of KeVita Probiotic Drinks – and more recently, the founder and CEO of Flying Embers Organic Hard Kombucha. The episode airs Wednesday, July 31 at 7:00 p.m. (EST), and will then be available across all major podcast networks.

This “Life’s Tough” episode released on July 31st, 2019 and is now available on all major podcast networks, under the Podcast Channel “Life’s Tough”.

Bill and his partner, holistic nutritionist Chakra Earthsong, established their KeVita kombucha line in 2009. The company went from a small, regional brand to an international leader – selling to 20,000-plus retail locations across North America.

Then, in 2016, PepsiCo acquired KeVita for approximately $200 million.

It was on to the next big thing for Bill. He and a team of entrepreneurial associates established Fermented Sciences in Ojai, California. Their goal, as currently stated on the company’s website, was to “disrupt the alcohol beverage industry through the creation of a revolutionary platform of great tasting botanical brews with functional benefits.”

Kombucha, by definition, is a fermented beverage. It is usually made by adding a symbiotic colony of bacteria and yeast, (SCOBY), to sweetened black or green tea. The result is a light, effervescent drink that is about 3 percent alcohol. For a “hard” style of kombucha, adding more sugar and yeast creates a secondary fermentation process, leading to a drink with a higher alcohol content.

Bill’s company, Fermented Sciences, was still working on the new drink, when it nearly went up in flames, literally, in December 2017. A wildfire struck the area. It threatened the company’s home and the fermentation lab, a facility housed in a 100-year-old stone wine cellar.

“On the third night,” Bill said, “we stood on the precipice of disaster as a wall of fire tore through the canyon towards us. As the flames towered above and swirling embers filled the sky, we faced the complete destruction of our dream and potentially our lives.”

Bill’s beverage operation survived, and it now had a product name – Flying Embers.

In appreciation of the efforts of the local firefighters to save the property, Bill donates 1 percent of company revenues to firefighter charities across the nation.

Starts with a winery

The founder and CEO of Flying Embers began his career in the beverage industry in 2001, when he established Casa Barranca Organic Winery, also in Ojai, California.

Casa Barranca is dedicated to minimizing its impact on the environment. It produces its line-up of wines with sourced, certified organic grapes, using biodynamic methods. The wines are handcrafted in a century-old underground stone winery, and the facility is solar-powered.

Casa Barranca has been cited as the first certified USDA organic winery on California’s Central Coast.

Bill, who now resides in California, is a native of Homestead, Pa., a town near Pittsburgh. Following his graduation from the University of Virginia, he began a career in finance and investment banking.