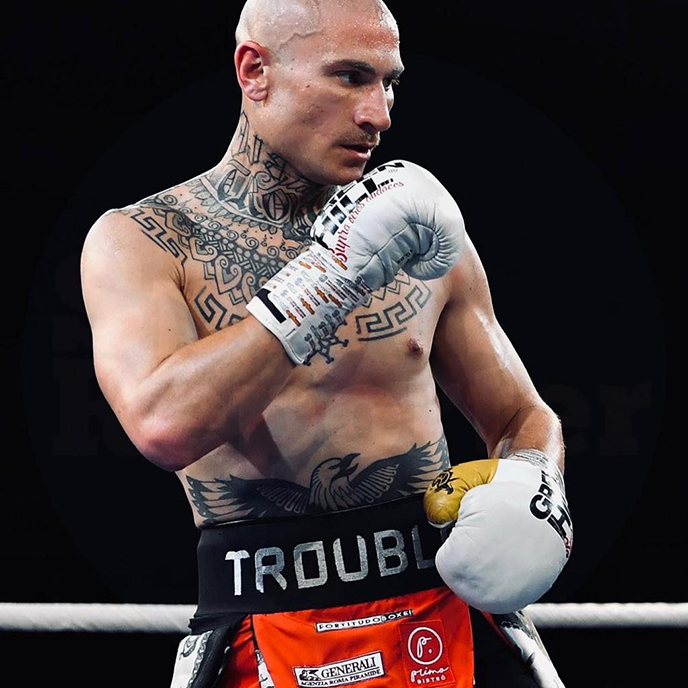 In the guest corner, all the way from Rome, Italy with a record of 14 wins against seven defeats with two draws and six big wins by knockout, Matt welcomes his first international guest, the former 4X regional champion and entrepreneur, Dario “Italian Trouble” Socci. Although he hails from Solerno, Italy, Socci made his professional boxing debut on Long Island, New York, subsequently moving to Asia, South America, and Europe to pursue his boxing career. Next up? The Middle East.

Socci says he started learning boxing late—age 16. Born into a culture of rabid soccer, aka football, fanatics Socci played the game but never liked it. Instead, he fell in love with the grit and grime of the boxing gym. Coming from a violent neighborhood, he says the gym felt more ‘real’ to him than the pitch. He got a taste of defeat early, boxing in a match he wasn’t quite prepared for. It didn’t stop him. Inspired by Mexican fighters like Chavez, whose style and attitude resonated with him, he persevered.

The boxing gym became his second home, and the people he met there, his second family. For the first time in his life, he felt that he was good at something. Maybe not the best, but good enough to want more. He moved to Brooklyn, NY then to an Italian neighborhood in the Bronx to train at Morris Park Boxing Club.

Socci’s desire to continue to stretch himself as an athlete led him to move to Germany, Japan and eventually Mexico, where he lived in Guadalajara for two years to go deeper into his preferred style. He moved back to Italy, where he opened his own boxing gym, Fortitudo Boxe Roma, and next to it a restaurant, Primo Bistro, in the heart of the San Giovanni district of Rome. Socci plans to relocate and open another gym later this year in Dubai, where boxing has gained insane popularity.

Socci, who calls himself a ‘boxer gourmet’ jokes that he must leave Italy to compete because, although he plans to end up there one day, he can’t stay in shape in his own country! And he’s damn proud that he’s good enough that he can finally boast the honor of having his photo on the wall at Morris Park.