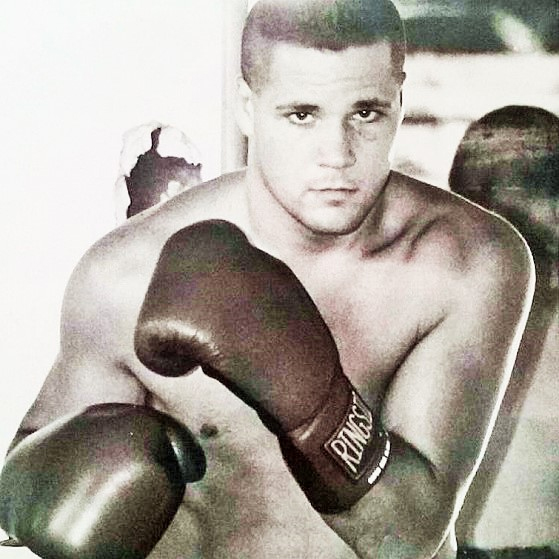 In the guest corner, from Hartford, Connecticut boasting a record of 38 wins against only 11 defeats, 21 by knockout, the former New England Middleweight Champion and WBF Intercontinental Supermiddleweight Champion, Connecticut Boxing Hall of Famer, the Iceman John Scully. Knowing what it takes to be a successful professional boxer, Scully now trains future champions, having worked with several world class fighters, assisting in training camps in Canada.

He says that boxing has made him tougher, and the mental toughness has helped him weather some of his life’s toughest storms, like the death of both his parents. Scully says, “I don’t get nervous at anything” because he’s competed on a world stage in front of thousands of people. Having had the great Roy Jones [75 fights, 66 wins, 9 defeats] as his sparring partner, Scully was more than prepared to face any opponent.

Boxing taught him to control his emotions—to remain calm amid any crisis. Perhaps that’s exactly why they call him Iceman. Because he’s mastered the technique, he can help other boxers learn what’s required for them to win. Using footage of bouts between some of the greatest fighters ever to step into the ring, Scully helps his trainees understand who they need to be. When you’re facing a fighter who’s willing to die, you must remain steadfast because, he says, “You’re not making these men quit… If you don’t remain calm, it’s a death sentence.”

Known for his keen insights into the sport, he is a frequent ringside analyst and guest commentator. He’s been featured on the ESPN Network and was a cast member of the Nuvo-TV boxing docuseries Knockout. Scully’s book, The Iceman Diaries details his life in the sport. Ever the philanthropist, Scully enjoys helping former fighters who’ve fallen on hard times.

Stay tuned for Matt’s FAST FIVE when Scully reveals of all the boxing movies out there, which one actually could’ve happened.

In each episode of Life’s Tough – Boxers Are TOUGHER!  host Matthew Pomara, licensed amateur boxer, and boxing writer and contributor to “The Ring” magazine and “NYFights.com,”  talks to men and women in the boxing industry whose hard-won victories and personal triumph and perseverance inspire listeners to fight on.  Because life isn’t about how hard you can hit, it’s about how hard you can get hit and keep moving forward.