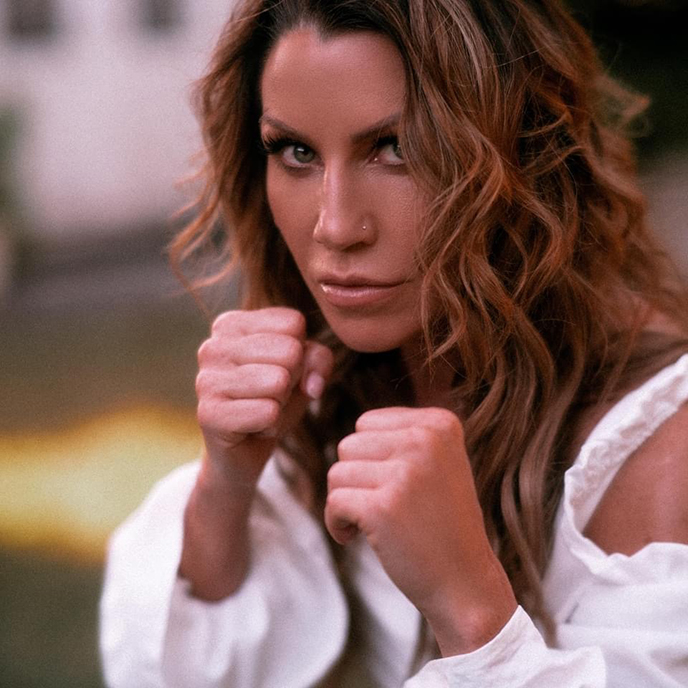 In this episode, Matthew talks to the two-time world champion, Maureen “The Real Million Dollar Baby” Shea with 29 wins, 13 by knockout against only two defeats. Maureen is known as the “Real Million Dollar Baby” because she was the main sparring partner for Hilary Swank in her preparation for the 2005 movie, Million Dollar Baby. Raised in the Bronx, New York, the city she dearly loves, she now trains and lives in south Florida, a move she ended up making to save her life.
The toughest opponent she’s ever faced is mental illness. Since childhood she struggled with depression, feeling like she was living in a ‘fishbowl’ seeing everyone else living on the outside, while she was stuck inside alone. In addition, she had seasonal affective disorder, a mood disorder that causes depressive symptoms, most commonly in winter. When medication and light therapy didn’t work, she knew she needed to leave New York, moving first to California, then ultimately Florida—all while advancing in her career.
As one of the top professional female boxers in the world, you might not guess she’s also suffered through abusive relationships AND a compulsive eating disorder. Although she was a champion in the ring, she didn’t feel worthy of her success which brought her more shame. And she was angry about it.
Maureen’s advice for overcoming mental illness…
+ Show up every day for yourself. She recommends walking for 20 minutes every morning. GET UP and GET OUT to get your endorphins going!
+ Find strength in a higher power. Her faith is her lifeline and the Bible verse Jeremiah 29:11 taught her that God had a better plan for her life even when she didn’t feel it.
+ Write down your feelings. This helps to remind us of where we’ve been, and how far we’ve come.
+ Ask for help. Professional therapists and addiction support groups are a mainstay in her life. Start with finding a group online and then graduate to attend in-person meetings. Talk to someone who makes you feel safe.
+ Find your purpose. Starting small, even if it’s just making your bed every day, can be enough to help you feel you’ve accomplished something. “Winning all the little fights will help you fight THE fight.”
At age 41, Maureen is battle-tested and no longer feels she needs to prove anything to anybody, and says she’ll leave boxing on her own terms with no regrets. All her hard work outside the ring has paid off. She now believes what so many others knew all along—she’s worth it.
@Maureen_Shea | Instagram and TikTok
MaureenShea | Twitter
Maureen “The Real Million Dollar Baby” Shea | Facebook
***
In each episode of Life’s Tough – Boxers Are TOUGHER! host Matthew Pomara, licensed amateur boxer, and boxing writer and contributor to “The Ring” magazine and NYCFights.com talks to men and women in the boxing industry whose hard-won victories and personal triumph and perseverance inspire listeners to fight on.  Because life isn’t about how hard you can hit, it’s about how hard you can get hit and keep moving forward.