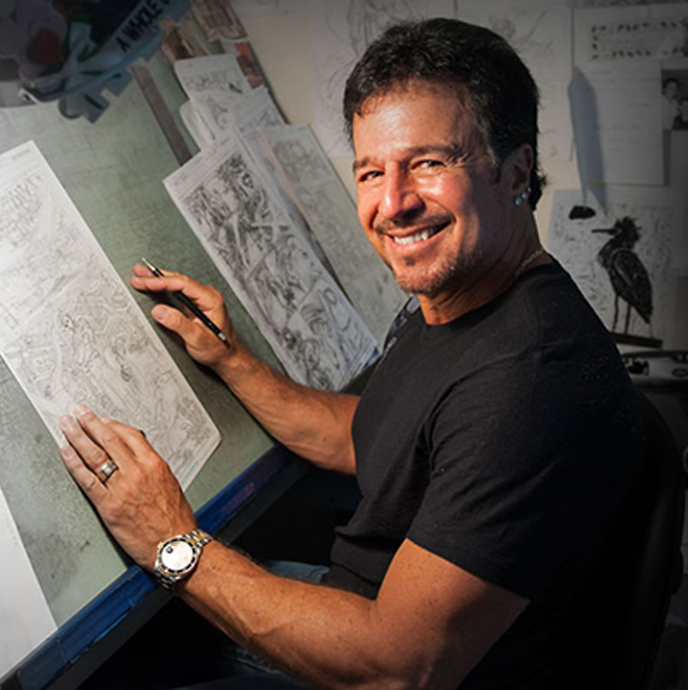 Life’s Tough Media is pleased to announce the latest episode of our “Life’s Tough: Superheroes are TOUGHER!” podcast series. Hosted by Stephen Shamus—President and co-founder of ACE Universe—this episode features John Romita Jr., an American comics artist best known for his extensive work for Marvel Comics from the 1970s to the 2010s.

This “Life’s Tough” episode released on June 25th, 2021 and is now available on all major podcast networks under the Podcast Channel “Life’s Tough”.

Following in his famous father’s footsteps was a tall order for John Romita Jr., but he’s made a huge name for himself at both DC and Marvel. He sat down recently with hosts of the Life’s Tough, Superheroes are Tougher podcast, Stephen Shamus and Alex Rae, and shared his thoughts on competition, comics, and everyday heroes.

Growing up, John’s Dad, artist John Romita Sr.- responsible for so many iconic covers for Marvel, wanted John to be a fine artist and go into advertising. Instead, John Jr. started early in the comic book industry and earned a name for himself. He says his Dad taught him to “keep your hands in your pockets, your mouth shut, and do your job.”

In terms of competition and naysayers, he also learned from his father that there’s always going to be someone better and that there’s an opportunity to learn from that. He’s come to understand that you just shouldn’t pay attention to nasty people. Having a good time and loving your work is what matters.

John relates that the point of his work is storytelling and that it’s not just drawing fancy pictures. He learned from icon Stan Lee that finding the perfect balance between fantasy and reality is what makes for a good story.

Stephen asks him some interesting questions on the podcast. You’ll learn about particular stories John can relate to. Find out which character he hasn’t worked on but would like to… and why. They talk about the intersection between comics and film and the effect it has on the industry.

When asked about everyday superheroes, John mentions his relationships with Cops, Firemen, Teachers, and those in the military, and the super heroic things they do every day. Learn why he’s married to a superhero… it will surprise you!

To learn more about the work of John Romita Jr., check out Marvel Comics or DC Comics. To learn about more Superheroes, join us for new episodes of Life’s Tough: Superheroes Are Tougher! At https://www.lifestough.com/podcast/superheroes/.