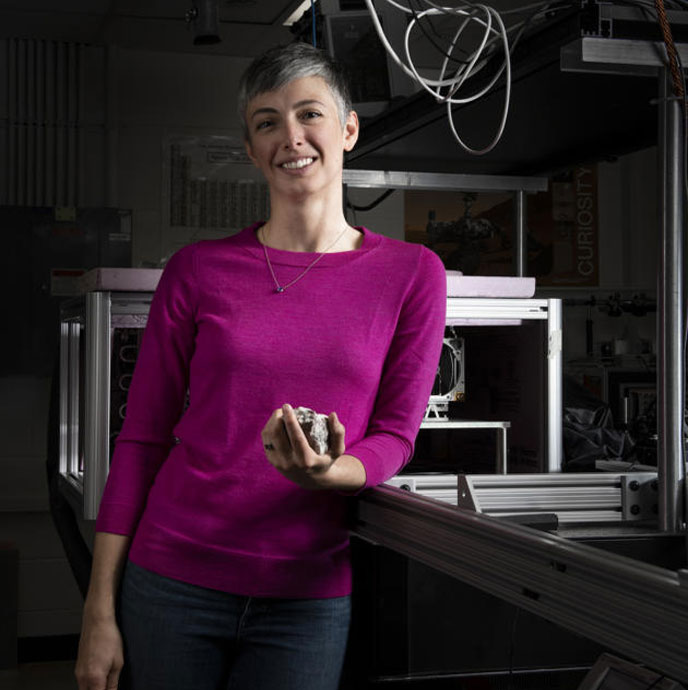 Nina received her Bachelor of Arts in Astronomy, at Smith College in Northampton, MA. She went on to earn her Masters in Earth and Environmental Sciences at Wesleyan University, and received her Doctorate in Earth and Planetary Sciences from the University of New Mexico.

Nina’s interest in space began young. “In 1986,” Nina says “my parents took me to an outreach event at a local university to observe Halley’s comet, which was making a close approach to Earth. I was seven years old and had not thought much about space (at that age). But when I looked through the telescope for the first time and saw the comet, I knew from that moment on that I wanted to know what was out there!”

As head of the Mars Curiosity Rover ChemCam engineering team at Los Alamos National Laboratory, Nina operates the Curiosity Rover’s ChemCam. Nina controls the ChemCam instrument that is attached to the Curiosity rover—one of five NASA rovers sent to the red planet—using a rock-vaporizing laser that analyzes the Martian surface. The instrument shoots rocks with a laser and then her team analyzes them, while a separate team selects which of the Martian rocks to blast. “The microphone is not just to listen to what the aliens are saying,” Nina jokes. “It can help us further analyze the rock.”

Nina’s outgoing, fun-loving personality brings a life to science in a way that few others can. She is broadly interested in understanding the history of water on Mars and the potential for life in Martian environments; however, her most recent work focuses on manganese in the Martian environment and its implications for habitability and bio-signatures.

In addition to her work with the Mars Curiosity rover, in 2015 and 2016, Lanza traveled to Antarctica to recover 569 meteorites from the ice. These ANSMET—The Antarctic Search for Meteorites—meteorite finds may have fallen into the Antarctic snow thousands of years ago. The region’s katabatic winds scour away layers of ice, exposing these space rocks.

Nina Lanza is currently living her dream of working on a spaceship with lasers on Mars and encourages young women to experience the joy of going into a scientific field, despite the occasional old-school attitudes and gender stereotypes.

Nina recently received a generous grant from the renowned NYC-based, The Explorers Club that will fund a team of experts who will use cutting-edge technology in a beautiful, Mars-like Arctic desert to tell the story of how the search for the chemistry of life on Mars begins with fieldwork on Earth near the Haughton crater in northern Canada.

Nina makes time every day to do some kind of physical activity, usually high-intensity interval training or yoga. She also sings in a small choral group and enjoys spending time with her son.

Join Richard and Nina for an energizing chat on Nina’s out-of-this world adventures!