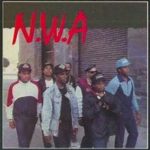 Dustin Plantholt’s “Life’s Tough, YOU can be TOUGHER!” podcast is honored to feature rapper Arabian Prince from NWA.

This “Life’s Tough” episode is now available on all major podcast networks, under the Podcast Channel “Life’s Tough” — or you can simply listen to it here on our website.

In 1988, N.W.A. released its first studio album, “Straight Outta Compton” – a revolutionary compilation of songs that torched the musical landscape with its raw, provocative lyrics and echoes of gunshots. It was viewed as the album that launched “gangsta rap.” Months later, the group headed out in a 15-seat van on a chaotic, national concert tour in which their shows were sometimes canceled or ended by local law enforcement because it was deemed too inflammatory.

The album – despite minimal airtime at first – sold nearly a million copies during the first year of its release. It would ultimately attain triple-platinum status – 3 million copies were sold by 2015, the year a film about N.W.A. came out. The film had the same name as the album.

Meanwhile, upon the group’s return to L.A. from their national tour, Arab voiced his concerns about the financial arrangements that N.W.A.’s manager was making with the group, especially regarding royalties. Arab had made successful records before N.W.A., and was familiar with how royalties worked. He decided it was time to walk.

Arab then embarked on a solo career. He came out with an album the following year. More than a decade later, he released more works as Professor X. His association with N.W.A. had long ended. The 2015 N.W.A. biopic even omitted any reference to him. (It was as if he had evaporated from specific scenes in the film.)

He also gravitated toward his enduring interest in technology. As a young boy, he became immersed in electronics when his cousins and uncles would return home from the military with ham radios, synthesizers and other electronic gear. Later, at age 15, he used money that he earned from working as a DJ to buy his first computer, an early Texas Instruments machine.

All the while, Arab’s family encouraged him to develop his affinity for electronics and to play football, in order to stay off the streets and away from gangs.

Arab gained proficiency with computers because, as has said, it was necessary to learn coding to use that generation of computers. Even when he was touring with N.W.A., he brought along a laptop to experiment with emerging technology. He could see how technology was converging with music, and the overall entertainment industry. Technology had a role in everything, he concluded.

Arab has, for many years, invested much of his efforts in the enhancement of video games, one of his passions. He has produced 3-D animation and special effects (at times for both movies and cartoons), designed software and content for virtual-reality games, and teamed up with a consultancy firm in the ever-expanding eSports and gaming industry. (As its name suggests, eSports are multi-player, video-game competitions that depict sporting events.)

Another of Arab’s passions is his ongoing effort to create technology centers, or “Open Labs,” where kids can experiment with technology, envision their futures with it and gain the benefits of resident mentorships.

Life’s tough – you can be tougher, like Arabian Prince, a clear-eyed innovator who has consistently had a knack for blending technology with his passions to further his pursuit of a life well-lived.