Life’s Tough – Jerry Springer is Tougher, confronting critics with humility and becoming one of the most “talked-about” hosts of our time. 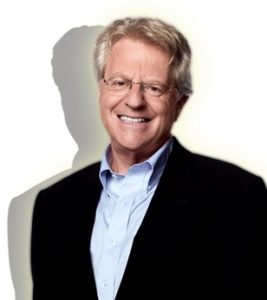 This “Life’s Tough” episode releases on May 20th at 7:30 p.m. (EST), and thereafter available on all major podcast networks, under the Podcast Channel “Life’s Tough”. You can also watch it on twitter / periscope @LifesToughMed1 – https://twitter.com/LifesToughMedi1

Gerald Norman “Jerry” Springer was born on February 13, 1944 in London, England to Jewish refugees—Margot Kallmann, a bank clerk and Richard Springer, owner of a shoe shop—who escaped Nazi Germany to avoid persecution. Other family members, including his paternal grandmother, were not as fortunate as they perished in concentration camps during the holocaust. In January 1949, Jerry’s family immigrated to the United States, settling in Kew Gardens, Queens, New York. He attended Forest Hills High School and later earned a B.A. degree from Tulane University in 1965, majoring in political science; and subsequently earned a law degree from Northwestern University School of Law in Chicago in 1968. One of his earliest memories about current and political events was when he was 12 and watching the 1956 Democratic National Convention on television where he saw and was impressed by John F. Kennedy. That interest in politics led him to work on the presidential campaign of Robert F. Kennedy, after graduating law school. After Kennedy’s assassination, he joined the Cincinnati law firm of Frost & Jacobs (now Frost Brown Todd) and then became a partner in the law firm of Grinker, Sudman & Springer (from 1973 to 1985).

In the early 1970s Jerry embarked on his own political career in Ohio, serving on Cincinnati’s city council. Not without some career lows, he was forced to resign from the council over a controversial issue, although he regained his seat at the next election. Despite being a liberal in relatively conservative Cincinnati, he was elected mayor of the city in 1977 (served 1977–78). After a failed bid in the early 1980’s for the Democratic nomination for governor of Ohio he decided to pursue television journalism and began work as a reporter at a local television station. He later became anchor and was the recipient of seven Emmy Awards for commentaries during his tenure.

In 1991 he branched out into talk shows with the debut of The Jerry Springer Show. Initially centered on political issues—guests included Oliver North and Jesse Jackson, and topics included homelessness and gun politics—the program struggled in its first few seasons. In early 1994, the show underwent a complete overhaul as Springer and his new producer, Richard Dominick, revamped the show’s format to garner higher ratings. Guests were everyday people confronted on a television stage by controversial situations that often promoted shouting or violence on stage. Although criticized by some as being staged and condemned by many political and community leaders as “trash TV,” it proved immensely popular with television viewers and received substantial ratings and much attention. By 1998, it was beating The Oprah Winfrey Show in many cities, and was reaching more than 6.7 million viewers. The show even inspired an opera—debuting in London in 2003—which won a Laurence Olivier Award for best new musical; and was subsequently staged in various U.S. cities.

Other career highlights include being named “One of the 10 Most Fascinating People” in 1998; an appearance on the popular show Dancing With the Stars in 2006; Winner, 2008 Fox Reality Channel Really Award for “Favorite Host” for America’s Got Talent; playing Billy Flynn in the Broadway theatrical production of “Chicago;” host of the 2008 Miss Universe Pageant. In 1998 Jerry starred in the movie Ringmaster, which was based on a Springer-esque television show. His other film credits include Citizen Verdict (2003) and The Defender (2004), in which he played the president of the United States. He has also made several TV appearances as himself and has acted in several television sitcoms. His autobiography, Ringmaster! (written with Laura Morton), was published in 1998. And as a self-described “country singer-songwriter,” Jerry has opened for Billy Ray Cyrus and has performed at actor Johnny Depp’s notorious club, the Viper Room.

Springer is married and is a lifelong New York Yankees fan.

Join Dustin and Jerry for a candid talk on his successful and sometimes controversial career and how he maintains clarity and peace amongst criticism and judgement. As Jerry says, “I think technology has changed the way we see things. Human behavior has not changed in the last 3,000 years. There is nothing that has ever been on our show that isn’t in the Bible, that isn’t in literature, that isn’t in Shakespeare.” 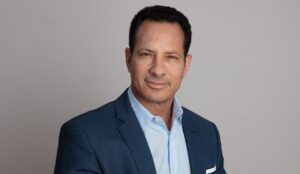