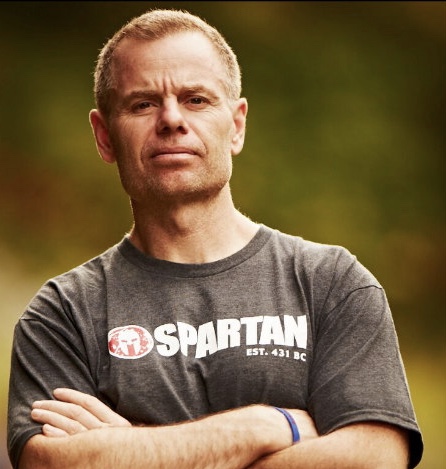 This “Life’s Tough” episode released on May 13th, 2020 and is now available on all major podcast networks, under the Podcast Channel “Life’s Tough”.

This “Life’s Tough” podcast episode releases on May 13th at 7 p.m. (EST), and thereafter available on all major podcast networks, under the Podcast Channel “Life’s Tough”. The YouTube Video Version of the show, can be found here

Joe De Sena, born on January 2, 1969, grew up in Howard Beach, Queens, with his mother Jean, a yoga aficionado, and his father, Ralph, a business owner. Demonstrating his entrepreneurial drive at a very young age, Joe—by his pre-teens—built a small business around selling fireworks, and then a t-shirt sales business. Later, as a teenager, he began a pool cleaning business, where he earned 750 customers in his local area. He then built a multimillion-dollar pool and construction business in college. After college he began a career on Wall Street, working at a brokerage firm as an equities and derivatives trader. During this time he engaged in various outdoor activities ranging from multiple Ironman races, to the Iditarod by foot. Joe competed in any extreme sports adventure he could find, testing his mental and physical endurance against nature. His racing resume is the stuff of legend—over 50 ultra-events overall and 14 Ironman events in one year alone.

Following his successful career on Wall Street, Joe moved his family to Pittsfield, Vermont to operate an organic farm, a bed and breakfast, and a general store for hikers. It was here his passion for ultramarathons, adventure races, and endurance events grew even greater and thus sparked the idea for Spartan. Determined and steadfast, he set his sights on ripping 100 million people off their couches by creating the Spartan movement and lifestyle. With more than one million annual global participants at more than 270 obstacle course and Trail Running events across more than 45 countries, Spartan offers heats for all fitness levels and ages, from beginner to elite and kids as young as four years old. The brand has transformed more than seven million lives since it was founded in 2010—and as Joe puts it “he has 93 million more to go.”

In addition to race events, the Spartan lifestyle encompasses all the tools one needs to transform their lives including training, nutrition plans and content, an Spartan Edge, an online learning platform and an extensive line of training and racing merchandise footwear, apparel and equipment.

Amongst being a contributor to publications including Entrepreneur and the host of the Spartan Up! Podcast—on which he interviews various public figures on their achievements—Joe is also a New York Times Best Selling Author of “Spartan Up” and “Spartan Fit,” and recently released his third book, “The Spartan Way.” As a popular keynote speaker, he has parlayed the teachings of his Spartan Principals into the SpartanX Leadership Forum, a series of events in which participants collaborate to solve challenges alongside business leaders while learning to overcome mental and physical obstacles.

Join Dustin and Joe for a stirring conversation on Joe’s journey and hear how de developed Spartan and the Spartan philosophy. Joe says, “Humans are meant to jump, run, crawl, and climb. The Spartan philosophy is simple: push harder, do more with less, be healthy. Sweat. It’s just about being comfortable with being uncomfortable.”