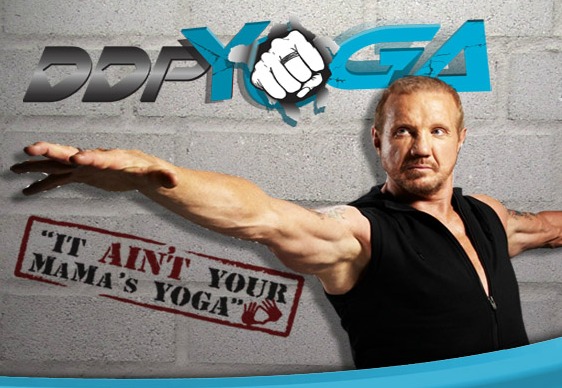 Dustin Plantholt’s “Life’s Tough—YOU can be TOUGHER!” podcast is honored to feature Diamond Dallas Page (DDP), an American semi-retired professional wrestler, fitness instructor, motivational speaker, and actor. DDP’s unrelenting drive and ambition would lead him on an inspirational journey from three-time world wrestling champion—for WCW, WWF (now WWE), TNA and AEW—to his current endeavor of inspiring others to “Own Your Life” through his life-altering DDPYoga—a cutting-edge workout that incorporates the basic principles of yoga blended with elements of strength conditioning, Pilates and mixed martial arts.

This “Life’s Tough” episode released on May 6th, 2020 and is now available on all major podcast networks, under the Podcast Channel “Life’s Tough”.

Born Page Joseph Falkinburg, on April 5, 1956 in Point Pleasant, New Jersey, DDP was the eldest of three children and the son of Sylvia and Page Falkinburg, Sr. At age three his parents divorced and DDP being raised by his father till the age of eight, whereby his father took him to live with his grandmother, who then raised him. DDP was an energetic kid, who would barrel through his grandma’s kitchen on his tricycle, swing from chandeliers, and cannonball pool parties. Growing up dyslexic, he also faced many challenges throughout his childhood and educational years.

His steadfastness and determination helped him reach several athletic goals during his twenties and early thirties. But that did not stop him from striving for the unattainable. DDP decided that he could and would do something that had never been done before… in any sport. Approaching 36, he became the oldest rookie in history and started wrestling at an age at which most athletes reflect on their careers. DDP put in all on the line and on the mat to stay healthy enough to climb from the bottom of the ladder to the main event. His incredible work ethic, training regimen and preventative maintenance along with unmatched personal focus and determination enabled him to battle the hands of time and stay healthy enough to wrestle with men half his age for years to come. His uncanny ability to create his character along with story lines that fans could relate to propelled him to national notoriety and made him one of the hottest merchandising commodities in professional wrestling.

During his fourteen-year career, he captivated audiences and became a three-time world wrestling champion. Highly publicized and financially successful pay-per view and network feuds with wrestling giants such as Randy “Macho Man” Savage, Hulk Hogan and Bill Goldberg became legendary for hardcore wrestling fans, but DDP also was able to bridge the gap between sports entertainment wrestling and mainstream entertainment. As networks, actors and professional athletes became more interested in the fan base and ratings that professional wrestling was attracting, DDP became the unlikely tag team partner of late-night talk show host Jay Leno, basketball icon Karl Malone and movie star David Arquette. Those pay-per-view and charity match appearances versus Hollywood Hulk Hogan and perennial “bad boy” Dennis Rodman are memorable to both fans and non-fans alike. To cap off an illustrious career, on March 31, 2017, DDP was officially inducted into the WWE Hall of Fame as part of the class of 2017.

Along with the championship titles and main events came pain and injury in the form of torn rotator cuffs in both shoulders, and a torn meniscus in his left knee. While performing wrestling stunt sequences during the making of the movie “Ready To Rumble”, DDP severely damaged his back when he suffered ruptures of his L4 and L5 discs. Now in his mid-forties, it seemed that he should listen to all those who suggested that either surgery or retirement would ease the pain and be the best solution to the loss of mobility his injuries had caused. Knowing that his positive attitude was equal to the challenge of rehabilitation, DDP decided to search for a better answer. Along with the support of doctors and physical therapists, he became an expert at healing his own body—studying and experimenting with chiropractics, applied kinesiology, nutrition, organic juicing and supplementation to create the perfect mix of wellness for a person who was trying to, as he put it, to put “Humpty Dumpty back together again.” His quest led him back to the mat…except this time it was a yoga mat. After studying the positive healing effects and increased flexibility that yoga positions provided, DDP became a devotee and adapted the discipline to meet his own needs. Out of necessity and to help heal and inspire others, he developed DDPYoga—a comprehensive, creative and motivational approach to longevity and better understanding of health and fitness that is presented in 20, 30 and 45 minute workouts.

Join Dustin and DDP for a gritty and inspiring conversation on DDP’s life journey and what motivates him and allows him to inspire others and hear how and why he developed DDPYoga. DDP says, “Do you want to lose weight? Do you want to learn how to eat properly? Do you want to lower your stress? Do you want to become more flexible and get stronger? No matter what your goal is…DDPYoga does it all! DDPYoga is not just a workout or an eating plan; it’s a lifestyle.”