Life’s Tough – but Chris & Emily Norton are TOUGHER, by finding their miraculous power to stand. 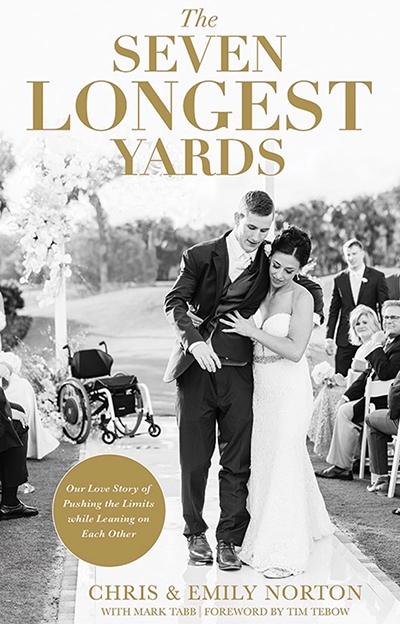 This “Life’s Tough” episode released on August 28th, 2019 and is now available on all major podcast networks, under the Podcast Channel “Life’s Tough”.

On October 16, 2010, Chris Norton’s life changed forever. A freak accident on the college football field left him paralyzed from the neck down. Suffering a severe spinal cord injury, Chris was given a 3 percent chance to ever regain any feeling or movement below his neck. Through sheer grit, determination and faith, Chris defied all odds and found the power to stand, and ultimately achieving unimaginable goals he set for himself. A split-second decision changed Chris’s life drastically, but he didn’t let this tragedy define him—he defined it!

After graduating from college, Emily went through a dark time of deep depression, suffering from severe anxiety, and at one time during her lowest point, had lost all hope. Her passion to help neglected and abused children put a heavy burden on her, feeling responsible to help every child possible. She regrouped, overcoming her depression, through her faith and by leaning on the help of others. She further harnessed her passion and has set her life’s mission to better the lives of the under-represented youth in our society.

Three years after his accident, Chris and Emily met. Emily became his “best” personal trainer and later, as his fiancé, helped Chris reach his first lofty goal—taking 10 incredible steps across the stage at his college graduation. That uplifting moment went viral and was watched by millions of inspired viewers.

Their upcoming book, Seven Longest Yards, tells their unforgettable love story, sharing their struggles and incredible journey—facing adversity head on and thriving from it. As Chris and Emily say, “Perseverance isn’t about the physical act of standing: it’s about attitude, and the ability to shape yourself in the face of adversity.”

Together they have accomplished goals they never even dreamed of. Through their faith and never-ending courage, they are constantly striving to grow and contribute to society. They are helping abused and neglected children and are “walking the talk”—having adopted 5 beautiful girls and fostering an additional 17 (and counting). Join us in listening and being moved by this awe-inspiring young couple.