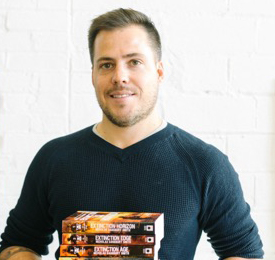 Dustin Plantholt’s “Life’s Tough, YOU can be TOUGHER!” podcast is honored to feature Nicholas Sansbury Smith, a New York Times and USA Today best-selling author of post-apocalyptic science fiction, with over a 1,000,000+ books sold.

This “Life’s Tough” episode released on May 8th, 2019 and is now available on all major podcast networks, under the Podcast Channel “Life’s Tough”.

Nick is the author of four series, all set in post apocalyptic worlds: Hell Divers, Extinction Cycle, Trackers, and Orbs. He self published his first book in 2013 via Amazon when writing was just a hobby. Since then he has had two major book deals with top five publishers (Simon and Schuster & Orbit Books) and a third with Blackstone Publishing. A hybrid author, Nick has continued to self publish as well, including the Trackers series, and Orbs.

Probably best known for his Extinction Cycle series, a saga that has expanded into eight books in the main storyline, and multiple spin-off stories from a dozen plus authors in the former Kindle World Program. The series was also translated into German in 2018. Narrated by Bronson Pinchot, the first audiobook, Extinction Horizon hit #1 in the entire Audible store.

The Hell Divers series has also seen major success in Audio and other formats. The saga was recently optioned for film/TV. Narrated by RC Bray, Hell Divers was an Audible editor’s best of science fiction and also hit #1 in the entire Audible store as well as the New York Times bestseller list. The fifth Hell Divers book – “Captives” – is out on May 7th.

Prior to launching his writing career, Nick worked in disaster planning and mitigation for the Iowa Homeland Security and Emergency Management office. He assisted communities with their plans for responding to natural and man-made catastrophes. This particular field of work later inspired him to begin writing fictional narratives tied to apocalyptic events.

Nick once wrote that he found his writing voice while training as an Ironman triathlete. The rigorous preparation for these triathlon competitions – which require long stretches of swimming (2.4 miles), biking (112 miles) and running (26.2 miles) – afforded him the solitude, time and mental clarity he needed to develop his literary world-building.

He resides in his native town of Des Moines, Iowa, with his wife and dogs.

Life’s tough – you can be tougher, like Nicholas Sansbury Smith, one prolific writer on a literary mission to save (what’s left of) the world.